What is Tai Chi?

Sometimes described as moving meditation, Tai Chi is an ancient and powerful form of Chinese exercise, which promotes mental and physical health. The graceful flowing movements bring about a sense of calm, while strengthening the joints, muscles, tendons and bones, and improving circulation, breathing, and the function of the internal organs and nervous system.
Developing a Calm Mind
Most exercise is about improving the condition of the body. What sets Tai Chi apart, is that it also benefits the mind at a deep level. This is because the main focus in Tai Chi is to attain Sung (sometimes written Song). This roughly translates as “release”, and this means to release both physical and mental tension. Whenever something stresses us mentally it manifests as tension in the body, which can lead to pain and postural problems. It also triggers the fight/flight response, resulting in digestive problems, poor sleep etc. Most people are carrying this unnecessary tension around constantly, even in their sleep, it becomes habit. Tai Chi first makes you aware of it (Ting), and then teaches you to release it (Sung), until this process is second nature. This is life transforming, it changes how you interact with the world. Because you no longer respond to events with tension, life becomes less stressful, and therefore happier, which in turn makes you healthier!
The Physical Benefits
So how does all this relaxing get you fit?!
It’s to do with WHAT we relax. By releasing the unnecessary tension in the body, the core muscles and fascia are engaged as you become more able to isolate them. Tai Chi can be deceptively physically demanding, the legs get a particular workout, when your centre of gravity drops as you learn to sink your tension down.
As Good as Any Exercise for Fitness
It’s now proven that Tai Chi can keep you as aerobically fit as Zumba. Tests have also revealed that Tai Chi is much better than any other exercise for fall prevention in the elderly. This is no doubt due to the massively increased awareness of your body you gain through practice, enabling you to move in a much more optimal way. Appearances can be deceptive, the apparently easy gentle movements of Tai Chi can be both physically and mentally taxing. Paradoxically, the better you get at controlling and releasing your body, the more challenging the movements become, as you learn to engage your postural muscles. I sometimes can’t get through the Form, as my legs are trembling so much!
Tai Chi as a Martial Art
The full name Tai Chi Chuan (sometimes written Taijiquan), translates as “Supreme Ultimate Fist”. Before the health benefits became widespread knowledge, it was purely practised as a potent martial art. A Taiji Master uses his/her increased Ting (awareness) to manipulate another fighter’s Li (brute force and tension) to their advantage, neutralising an attack, and returning the force on contact. This process is difficult to put into words, so here’s a few videos of Masters in action!: 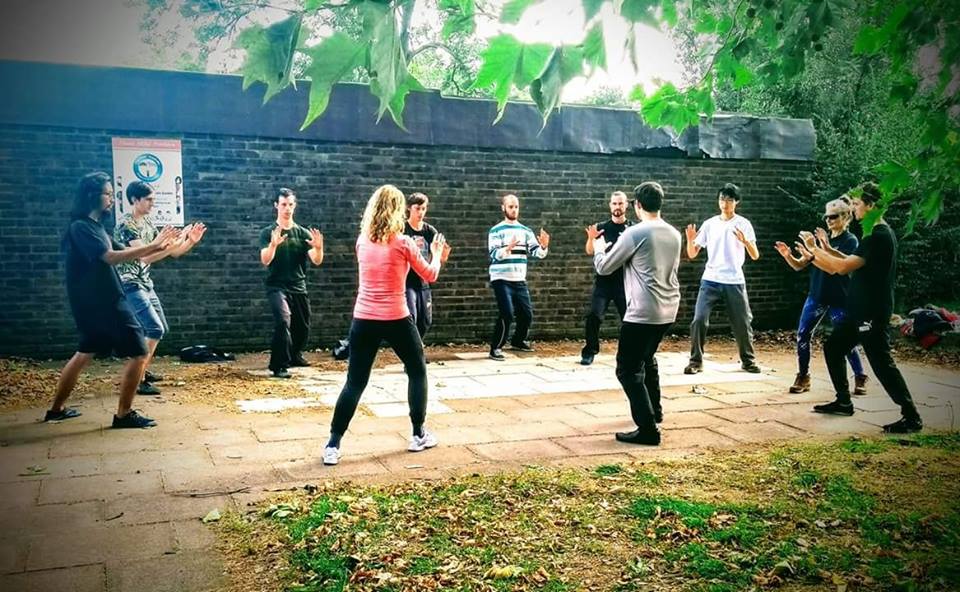